Studying Korean and Similarities to Chinese 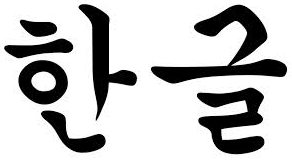 Even though I love China, Chinese languages and my Mandarin is far from perfect, I started learning Korean because I have grown fond of the Korean culture. It has been a long time since I started from zero to start a new language and I must say I love the challenge. I always wanted to be able to speak more than one Asian language and besides Cantonese, Korean is so interesting to me. I would like to share with you guys how I started studying Korean, what methods I am using and how Mandarin skills can help when learning Korean.

During my time at university in the US, I had a lot of Asian classmates and the last two quarters the majority of them came form Korea; this is how I became more interested in their culture and language.

Koreans do not use the same characters like in Mandarin. However, they did up until 1400. Before that time, Koreans used the same characters like in China but pronunciation varied. Then Sejong the Great, the fourth king of the Joseon Dynasty, developed an easier system, the Korean alphabet, which was completed by 1443. The Korean alphabet, called Hangul, consists of of 24 consonant and vowel letters, which makes it actually easier to read and pronounce than Chinese. 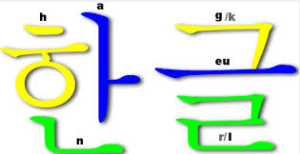 StHangul consist of two groups of consonants and vowels.

However, Hangul works differently than the Latin alphabet in which you put the letter after each other. Hangul letters are grouped into blocks, such as 한 han, each of which transcribes a syllable. That is, although the syllable 한 han may look like a single character, it is actually composed of three letters: ㅎ h, ㅏ a, and ㄴ n.

I have never taken a class in Korean or had a teacher for it, I am just studying by myself. Also, I did not buy an actual textbook or anything yet, I have just been learning from online resources, and here’s which:

There actually are a lot of Korean words with a very similar pronunciation to Mandarin Chinese.

I have only studied Korean for a few weeks and did not dedicate as much time to it as I should because I am still busy getting my Bachelor’s. However, I am graduating in a little while and then I’ll have much more time to focus on studying Korean. However, I am very proud that I basically got the Korean alphabet down and can therefore read Korean words. I might not know what they mean but I can read and pronounce them. That’s gotta be worth something, right?

Does anybody have some tips how I could learn Korean better? Anyone made the same experience with Chinese and Korean?