What to do in Cheongju – The 20 Best Things to Do

Are you new to Cheongju and want to know where the best places to go are? I’ve lived in Cheongju since 2015 and created this list of the 20 best things to do in Cheongju for people who just moved here or those who want to visit.

Here are the 20 Best Things to do in Cheongju

Cheongju’s pride and joy is the Jikji, the oldest existent book printed with movable metal type in the world.

Printed in 1377 during the Goryeo Dynasty, the Jikji is 78 years older than the 42-line Bible printed by Johannes Gutenberg.

At the Early Printing Museum in Cheongju, you will be taken back in time following the entire process of printing with movable metal type.

Unfortunately, the original Jikji book is located in the National Library of France after a French diplomat purchased the book during the Joseon dynasty.

Yonghwasa is a temple located near Shinae in the center of Cheongju and one of the oldest in the region.

The temple was built around 600 AD during the Shilla Dynasty as a branch of Beopjusa Temple near Sognisan National Park.

Modern art lovers should come and check out the MMCA in Cheongju close to Cheongju University.

The MMCA Cheongju opened in December 2018, as an addition to the other MMCA locations Gwacheon, Deoksugung, and Seoul.

The museum is located in a reconstructed old tobacco factory from the 1940s and is a major destination for art lovers from all over Korea.

For more information check out this virtual tour of the museum.

This mountain near downtown Cheongju is a popular destination for walking enthusiasts and those looking for an easy hike.

There are many trails around the mountain on the Uamsan hiking course to explore. You can take a walk in fresh air while getting a good view of the city of Cheongju from above. Especially in the springtime during cherry blossom season, the circular Dullegil is a very nice hiking or driving course. You’ll find some of the tallest cherry blossom trees in Cheongju here.

Uamsan is also located next to Suamgol Mural Village, where you can find many cute cafes. 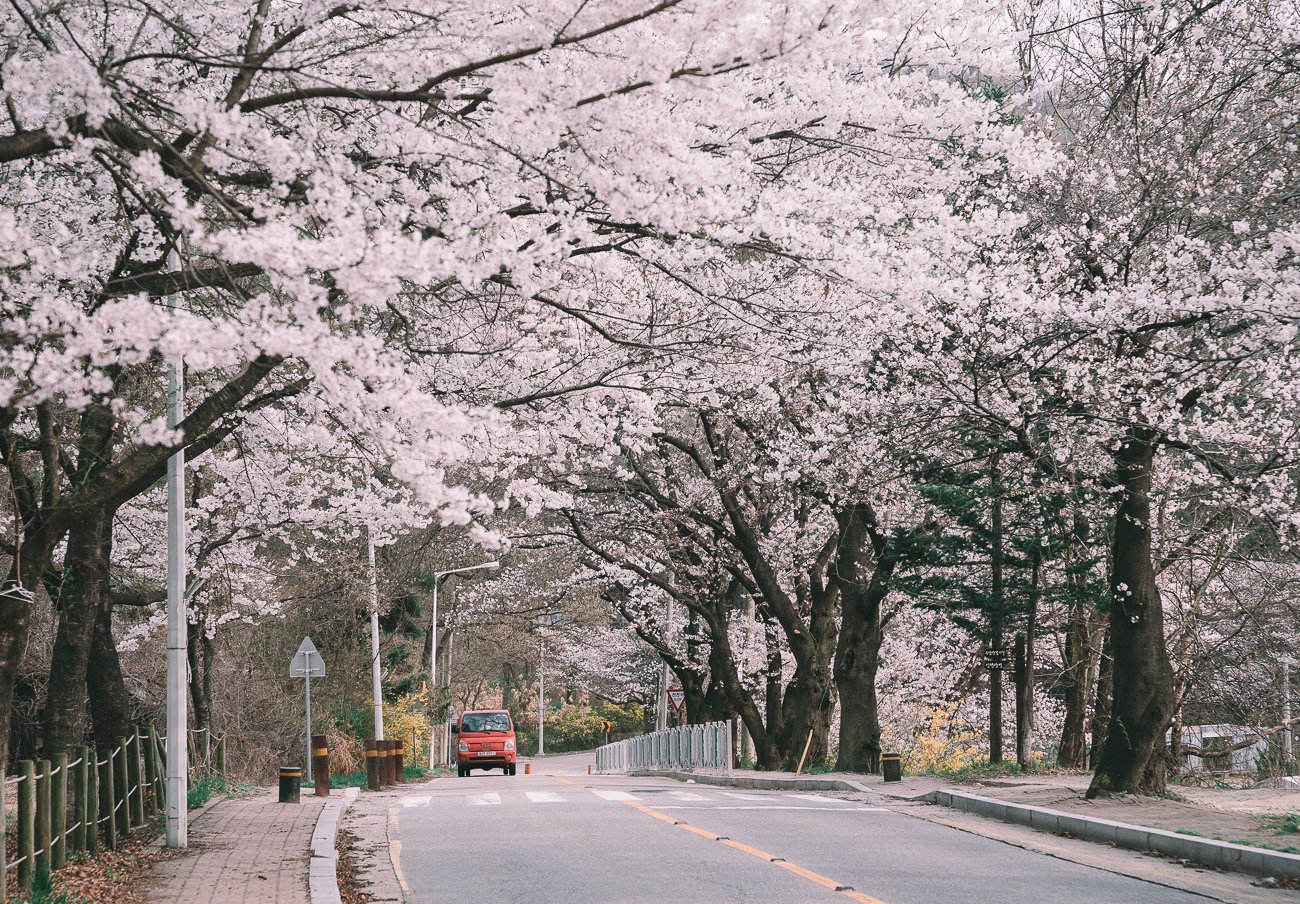 This mural village sits at the foot of the 353m tall Uamsan Mountain near downtown Cheongju. It’s a popular place for café hopping or to hang out on rooftops in the summer evenings.

Just like the famous Gamcheon Village in Busan, Suamgol developed after the Korean War as a shantytown for war refugees. In 2007, the local government introduced an art project to polish this part of town. Local artists started decorating the houses with wall murals of flowers and other heartwarming scenes.

In addition, you will find some of the best cafes in Cheongju here, all competing for the best spot overlooking the city. One of the oldest and most popular is the Full Moon cafe with an impeccable cheesecake bingsu.

Suamgol is also famous for the many K-dramas that were filmed here, including:

When hiking around Uamsan, I recommend making a stop at this beautiful temple.

The temple was built in 1954 and is among the newer temples in the city. Nonetheless, it’s an especially beautiful temple complex with a pretty white Buddha statue in the courtyard. In the springtime, you can also find some rare cherry blossom varieties here.

This building from 1939 served as the governor’s office of Chungbuk Province. Later, the government transformed it into a creative and future-oriented culture and art space for the residents of Cheongju.

There is a permanent exhibit on display that focuses on 12 of the most important writers in Korean history. It’s incredibly interesting and worth a visit. After exploring the museum, I recommend checking out the book café and enjoying a relaxing cup of coffee or tea.

A Hyanggyo was a government-run provincial school established during the Goryeo Dynasty (918-1392) and Joseon Dynasty (July 1392 – August 1910).

The facility in Cheongju is a space for cultural events today and it’s also where my husband and I had our traditional Korean wedding in 2016.

Besides weddings, they also do different seasonal events, tea ceremonies, or Chinese character lessons. You can refer to their official website for further details.

The largest traditional market in Cheongju is Yukgeori Traditional Market in the heart of the city.

The name Yukgeori is a combination of yuk, the number six, and the word geori for street. This is a reference to the location of the market, at which six streets from all different directions of Cheongju meet.

A traditional market like this is the perfect place to try different Korean snacks and street food and watch the hustle and bustle of a market in Korea.

History-lovers should definitely check out the Cheongju National Museum. This museum opened in 1987 and collects and preserves national cultural treasures.

The museum owns more than 42,000 artifacts and has over 1,200 pieces on display from the Old Stone Age to the Joseon Period.

Similar to Hyanggyo, a Seowon was the most common educational institution of Korea during the mid-to-late Joseon Dynasty. They were private institutions and combined the functions of a Confucian shrine and a preparatory school.

This particular Seowon was built in 1570. It was in operation for exactly 300 years until it was closed in 1871 following the abolishment of the Seowon education.

In 1957 the city of Cheongju restored the building and further renovated it in 1987. It’s a beautiful place to go and enjoy the peacefulness but occasionally it’s also used for public events.

If you are interested in Korean temples, you have to check out Bosalsa in the Yongam-dong area.

Bosalsa is the oldest temple in Cheongju. It was founded in 567 during the Shilla Dynasty. The five-story pagoda in front of the main hall of the temple is also extremely old and dates back to the late Unified Silla or Goryeo period.

The temple at Bosalsa is also home to a national treasure Buddhist painting from the Joseon Dynasty around 1650. It’s a large painting on hemp cloth measuring 6.13m by 4.26m.

This exhibition hall focuses on female activists from the independence movement from Chungbuk province.

Building A has a comprehensive exhibition on the female heroines from the activist movement for Korea’s independence during the Japanese occupation. Many people worked for the liberation of their country through the March 1st Movement.

This building aims to honor the women independence activists who have fought in the liberation army and the provisional government movements of the time.

He is regarded as one of the leading Korean painters of the 20th century. Unbo is especially known for his series of Catholic paintings depicting the life of Jesus as a Korean, wearing hanbok and living in a traditional Korean village.

Visitors can explore the house and see where Unbo worked, painted and did calligraphy. The premises also features a museum hall and a sculpture park.

For more details about this site, check out my guide to the House of Unbo.

The house and its beautiful courtyard are also featured in various K-dramas, for example:

This is a castle built with soil on flat land in the center of the plain along the Mihocheon Stream. While the date of construction is not exactly clear, some records point to the first half of the 10th century.

The length of the castle is 675m and the height is 3.5m. Inside the castle, archaeologists have found traces of dwellings, pillar holes, roads, and other relics.

Today, this place is especially popular for photoshoots around the single tree on top of the site.

The local fortress in Cheongju is a popular place for hikers. The huge open field near the fortress entrance is especially popular with picnickers in the spring and autumn time.

The fortress was built during the Three Kingdoms Period (around 660 AD) and is 4.2km-long and has three gates that almost remain completely intact.

For those wanting to get a better understanding of Korean culture and the way of life of Koreans back in the day, Munui Cultural Complex is a great place to visit.

The location next to the scenic Daecheong Dam makes it a perfect nature outing as well!

This villa functioned as the private summer villa used by former presidents of Korea.

The house was built in 1983 and became open to the public in 2003. The location of this residence was strategically chosen due to its central location in South Korea and the beautiful scenery near water, mountains, and the forest. This reflects the traditional Eastern features of the perfect location of a residence.

The total area of the presidential villa is extremely vast with 1,825,000ｍ². Besides the main building, there’s also a golf range, heliport, and fishing area.

If you want to escape the city and get some fresh air, Midongsan Arboretum is a great place to do so.

In fact, it is the largest arboretum in the central part of Korea on 2.5 million ㎡ of land. The park is divided into 10 specific garden areas, such as the wild plant and flower garden, a fruit-bearing tree garden, conifer, oak, and maple gardens, as well as a warm temperate botanical garden.

Hiking enthusiasts have to head to this national park for a hike!

Songnisan National Park is located on the border between Chungcheongbuk-do and Gyeongsangbuk-do and covers an area of 274.541 km2. The name of the national park literally translates to “Remote from the Ordinary World”. This is a reference to the park’s position in the very center of South Korea.

The entrance to the park is lined with many traditional restaurants and cafes like most national parks in Korea. A hike to the peak Munjangdae takes around 3.5 hours one way.

If you don’t want to go on a big hike, you can explore one of Korea’s largest temples: the Buddhist temple Beopjusa constructed in 653. They also offer templestay programs at this temple.

As you can see, there’s a lot to do in Cheongju – and new attractions are popping up all the time. Let me know how you enjoyed this list and if there’s a place you can recommend to add to it.

Things to do near Cheongju:

This downloadable check list for Seoul contains insider information on what to see, do, eat and where to shop and party in Seoul, South Korea.

Love it? Pin it and save it for later!