Heyuan: One of China’s Hidden Treasures

The Square of Heyuan – 文化广场

Since China is such a huge country, there are thousands of unique places to travel to. From the big cultural sights in Beijing and Xi’an over great landscape in Guilin and Yangshuo to developed metropoles like Shenzhen: The Middle Kingdom offers something for everyone. However, there is one place that unites culture, landscape and city feeling: the city of Heyuan (河源) in Guangdong province.

Heyuan is on of my friends hometown and I have been there many times. It takes only about 2 hours by bus from Guangzhou (from Tianhe Bus Staion; around 80RMB one way) to get there. A lot of people – even some Chinese people – haven’t heard of Heyuan. Nevertheless, it’s a great place to go and do sightseeing, enjoy the outdoors and have fun!

The whole city is characterzied by various rivers and bridges. It does not feel like in a huge city, since 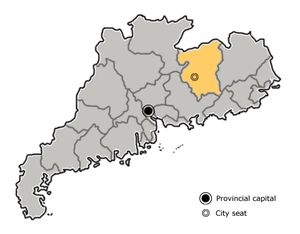 Location of Heyuan in the province (Photo credit: Wikipedia)

there is in fact a lot of nature in the city: trees, grass fields and water. The city of Heyuan is also experiencing a huge construction boom right now. Everywhere you go you see new building almost popping out of the ground. My friend once said that every year there is another huge change in Heyuan. This year, it will definitely be the completion of the first international hotel in the city: Hilton Hotel.

What to see and do

Being the largest lake in Southern China, Wanlv Lake attracts many Chinese visitors throught the year. It’s name comes from its evergreen environment all year around. However, the pure water, which is considered very rare in China, is its biggest feature. The lake covers an area of a total of 370 square kilometers. You can spend the day taking boat rides or hike around the numerous green mountains around the lake and enjoy the great landscape.

The site is open from 9am to 6pm and is located around 8 kilometers away from the urban district. Just take a taxi or ask locals about busses to the site.

This cultural village is located about 26 kilometers from the city center of Heyuan and is definitely a must-see when you are in the area. Still today, the majority of the people in the Heyuan are Hakka which is considered to be a sub-group of the Han Chinese. They also have their own language: Hakka Chinese. Sujiawei is a beautiful old Hakka village which features a bamboo forest and lots of old houses and temples of Hakka ancestry. To me, Sujiawei is the most beautiful place to see when in Heyuan. It has so much history and shows such a special atmosphere.

When you are in Heyuan you definitely need to try some traditional dishes from there. Since Heuyan is so close to Wanlv Lake and has a few rivers in the city itself, fishing is a huge thing in the city. This means, you can eat very good fish dished in Heyuan. Fish head stew or just simply Heyuan fish are the most popular dishes. Another specialty is 客家酿豆腐, which is special Hakka style Tofu. You may have had this kind of doufu before, but I’m sure it did not taste as good as the one you can find in Heyuan. Due to its Southern location, you can also find a lot of soup variations in the city.

Huang Longyan is a well preserved natural limestone cave. It covers an area of 6,000 square meters of which 550 meters can be visited by tourists. Due to its convenient location it works as a natural air conditioning with an average temperature of 22 degrees Celcius throughout the year. The most beautiful part of the cave is the water pool featuring beautifully lit up stalagmites and stalactites.

Heyuan was officially named “Hometown of the Dinosaur” because of its place in the Guinness Book of World Records after finds of 10,008 dinosaur egg fossils were discovered. Eight fossilized dinosaur skeletons and 168 dinosaur footprints had also been discovered in the area, attracting the attention of experts both at home and abroad. All eggs and fossils come from thel ate Cretaceous period, 65 million years ago.

Heyuan is also the place where Asia’s tallest water fountain is located.  The fountain lies between the Heyuan Bridge and Zhuhe Bridge. The fountain was  completed o­n February 6, 1999. The fountain has a show every evening around 8 o’clock.

Partying and nightlife can be quite expensive in China. Heyuan features a good selection of nightclubs which are still affordable and also a lot of fun hanging out at. Here is a small overview of clubs I can recommend in Heyuan:

Heyuan has become like a home to me. It is also becoming more and more developed with international companies setting up offices in the city such as Hilton Hotel Group, Walmart and many more. It is expected that in only 15-20 years, Heyuan will be comparable to cities like Guangzhou and Shenzhen. I am so excited to see future changes in the city. Heyuan is also famous for it’s clean water and fresh air.

Have you ever been to Heyuan? Are you planning to go? Let me know your thoughts!