The Pros and Cons of Being a Western Woman in China

Me and my friend Vanessa in Yangshuo

Even though there’s already many blog posts about this topic, I would also like to share my personal experience about being a Western women in China.

As Sara Jaaksola described in her blog post “Being a Western Woman in China”, there’s not a lot of foreign women living in China, or at least in our Chinese hometown of Guangzhou in Guangdong province.

During my time in Guangzhou I gained a lot of experience – positive and negative – about being a Western girl in China.

“You are so beautiful!” 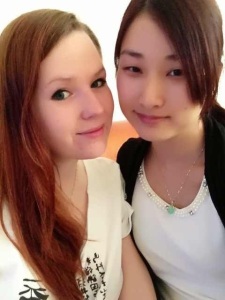 In my opinion, there are a lot of “advantages” for Western women in China. The most obvious “pro” might be that as a Western woman you get a lot of compliments about your looks. People always told me what a beautiful white skin, nice big blue eyes, pretty nose and long eye lashes I have. Therefore, everywhere you go, you stand out. In the beginning it might feel great and you feel confident, but it can also be pretty annoying when people look at you all the time or try to talk to you all the time. But when living in China you have to be able to deal with that and don’t take it as rude. Chinese people are very curious and it’s always meant in a friendly way.

However, on the other hand I realized that the figure of a Western female might easily be considered “fat” in China. When in the West you want to get nice curves and a booty, in China they might see it as a negative. However, there’s plenty of Chinese guys who are just looking for that 😉

Another thing I noticed was when going out to clubs and bars where there’s more Chinese people than foreigners people might think you are pursuing “a special career”. Especially in Guangzhou, there is a lot of foreign women, a lot of them from Russian and east European countries, who are in Guangzhou for modeling but also provide “special services” for Chinese men – if you know what I mean.  So sometimes, when clubbing Chinese people might think you are this kind of woman.

Me and my friends from Hongkong

Being a Westerner in China, in general, makes it relatively easy to get to know new people and make new friends. A lot of Chinese people just randomly start talking to you and want to make friends or might ask you to help them with their English, etc. Especially for learning Chinese, this is definitely a plus!

However, this also has a big downside. Personally, I think it is very hard to find “true” Chinese friends, who like you for your personality and not because you are a foreigner. When going out on the weekends, it usually only took 10 minutes tops for me and my other German friend to get to know some people and party with them. But usually those connections you make are not “real” – they just invite you over to have a drink because you are a foreigner. This also goes for Chinese women. Actually, one of the worst experience in this context I made was with Chinese girls. Some Chinese girls invited us to their table to drink and party together. As soon as we started I felt like a barbie doll or puppy dog: The girls when totally crazy taking tons of “best friend” pictures with us. So far so good. But then, they started ordering lollipops, ice cream and other food and were feeding us. It was a horrible experience I could not stay with them for a long time and soon left.

Nevertheless, there also are true friends out there! I met a lot of Chinese guys and girls that don’t just like me because I am European. And even now that I am out of China for another 6 months, we still keep in touch.

Lots of Freebies – Lots of Haggling

Being a Westerner in China brings about an interesting mix of getting free stuff and being ripped off. I remember one time, I went to McDonalds to get a normal vanilla ice cream cone. The person in front of me, Chinese, also ordered a cone. When it was my turn, though, the lady at the counter gave me almost twice the portion than a regular ice cream cone. Further, again, when going out usually there will somebody show up within a couple of minutes buying you a drink or other stuff.

Another thing is paying for food/drinks in general. In China, it is still a “rule” that when eating out girls never have to pay. This sometimes, is a problem for me because I also like to pay the check from time to time, being a polite emancipated Western woman. However, this also leads male Chinese friends to “lose face”. Sometimes, when eating out with my ex-boyfriend, I would tell him before that I wanted to pay and just give him the money before going out so that it “looks like” he paid. It took me a while to get used to this tradition and it felt kind of ridiculous in the beginning but I always think like this: I am in a foreign country and it’s ME who has to adjust. In the end, I know I paid for the food and most Chinese men also adore this emancipated side of Western women.

On the other hand, being a Westerner in China in general, people think you are rich and have a lot of money. Therefore, when travelling or going to night markets, people try to rip you off in a way. Being a passionate traveler, I learned how to negotiate with stubborn vendors at an early age and usually, I can get the price I want. But if you are lacking this ability, or even if you are good at it, sometimes there will be situation where you just have to pay more because you are a foreigner. Just try to be stubborn and if the price is too high: walk away! There’s always gonna be another person selling the same thing. And usually when you pretend to walk away, to come after you and give you the lower price.

“Western Women Are So Open.”

My Friend Monika and I in Beijing

This is a widely spread stereotype: Western women are easy and open to anything. This prejudice has been created by dozens of Hollywood movies promoting meaningless sex and strong, independent women doing what they want. Also a lot of foreigners coming to China for a short period of time think they can do whatever they want. This goes for men as well as women. This is a common thing for young adults or students going about. It’s all about a fun time and partying and going crazy. However, in a country like China, where this kind of behavior is not common or regarded as appropriate in their culture, foreigners like this build a stereotype.

I experienced a similiar thing one day going out to a club. There was a bunch of older Chinese men at a table and they wanted to invite us to drink with them but we politely refused. However, the men didn’t want to accept this and tried again and again to convince us to party with them. Soon, we were tired of their advances and tried to leave, when he grabbed my arm. I aggressively got away from him and told him to let go and so we left.

Being a foreigner or especially a Western woman in China does not only have advantages. However, I can tell you, if your dream is to go to China for work, study, travel, whatever, don’t be afraid but also be cautious.

Have you experienced similiar things when living or traveling in China? Have you made different experiences? Leave a comment and pin it if you like this topic!